What compels us? Pulls us? Catalyzes us? Connects us? Who are we and what are we doing in this profession? In this public sector? In this institution we call school? Why do some of us keep coming back, day after day, year after year, decade after decade until we look back and realize that we accomplished something called a career; even as we watched others go silently into the night across those years?

Why do some of us keep pulling ourselves up and off the floor of the ring to continue on to the next round, in spite of our bruises and the blood we spill?

What binds us together? What pulls us apart?

Blog posts, twitter conversations, backchanneling and #chat discussions center the language of out of mainstream educators, parents, and even young people who attempt to answer these questions.  Social media capture the cadence of our conversation with the sometimes painful, sometimes achingly beautiful words and images of a poet even as others of us debate with impassioned, but crisp, political analysis.

We question whether we continue on another swing of our own perverse Newtonian pendulum. Or, is it possible social media lifts the quantum butterfly whose beating wings shift air currents across this nation, creating a learning world that we could never have envisioned in isolation of each other?

Still more of a back channel than a mainstream educational movement, those in the global communication network of educators still mostly watch from the outside as the next sentence is being written by politicians to frame American education.  We know well the drafting, revision, and editing processes in which our communities, our states, and nation now engage. We understand how mainstream media, political positions, new policy, new legislation, budget deliberations, and public hearings give voice to those who attempt to define the some; the all of us. Those with decades in education have seen this before. We know what the swing of the pendulum means inside schools.

One, a voice exploring the meaning of words like passion, joy, drive, inspiration, learning, democracy. The other, a voice of market share, big data, votes, rules, money, incentives, brand placement, and rhetoric.

The intersection of these voices juxtaposes the choices between the pendulum or the butterfly.

Both objects of motion- one coldly inanimate, the other joyfully alive.

One defined by the freedom to move at will. The other by  external control.

One mechanized. The other, part of the ecosystem.

In most ways, the current story of public education still represents our commitment to Newtonian physics, the classical mechanization of the factory school pendulum that many still hold dear.

But, in the back channel, our quantum butterfly wings unfold; with each pump of fluid we weigh our potential to take flight. It is here that we consider how learning becomes dynamic, active, deep, and vivid.

So, what will give lift to voices in the back channel? Will it be new legislation, policy, funding, political voices? I think not.

Instead, we must design education anew by generating an ever-increasing number of educators who believe in a mission to create spaces of inspiration for learners and learning. However, it will take more than 1 or 10 percent of us speaking the poetic and analytical voices of passion, joy, and drive to create spaces in which young people and educators can thrive in these 21st century days. 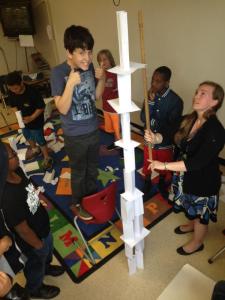 To accomplish such a vision, it must become one of lift, influence, and power that creates a front channel for our voices. We need our best educational technologists, our courageous leaders, our creative geniuses across America’s communities to create the front channel we must become. It’s our job, and our time, to increase the inspiration quotient for public education in every community in this nation.

Otherwise, we must accept again the next push of the educational pendulum and forget the potential of the butterfly’s flight.

( I wrote the first draft of this post in 2012. I felt then as if public education was in a downward spiral in which learning had become defined as being about passing tests and prepping for tests alone. Few questioned the standardization of every curricula, the loss of inquiry as an anchor for engaged thinking, the subtraction of hands-on learning from the academic curricula, the loss of play, story, and movement by design as a path to learning for our youngest children, and removal of course options from arts to physical education to shop class. Reduction or elimination of libraries, recess, club time, and field trips seemed to go without question.

Today, I am more optimistic that an awakening occurs. When I watch the movie Most Likely to Succeed, read Learn or Die, or listen to educators such as Yong Zhao speak to a different vision for learning, I know something is changing. It’s occurring in the social media conversations of educators everywhere. It’s found in a groundswell of big conference themes that focus on children as learners, not as data points. Even politicians challenge status quo assumptions about elevating national and state standardization expectations over the choices of local communities.

Some might say we are at crossroads in 2015. I see it as more of a chance to define education in this century not just a reform of the last century’s schools but a turning point transformation, indeed a contemporary Renaissance fueled by intersections of trans-disciplinary content with new contexts for learning. Because of our knowledge, tools, and communication networks, we have the potential to create learning opportunities that have never before been available in human history.)

1 thought on “The Pendulum or the Butterfly”